An iconic feature of Australia is the 11,400-kilometre-long Blue Mountains, which are made up of mountain peaks, sandstone cliffs, and valleys covered in dense forests.

When exploring the area, visitors will discover roaring waterfalls, breathtaking lookouts, and even a variety of unusual wildlife. Whatever kind of activity you prefer, the Blue Mountains are undoubtedly the ideal setting for a thrilling experience amidst the breathtaking Australian scenery. 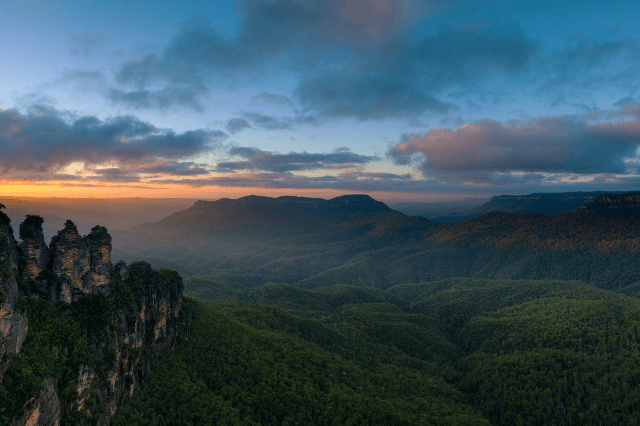 According to legend, the Blue Mountains date back to a time when the area was entirely submerged under the sea. The hard sandstone and shale rocks were formed as a result of the massive chunks of debris that eventually covered the seafloor and fell into the water.

Large rocks formed an uneven area of land as the water level started to drop. Sandstone and shale were abandoned to the whims of nature, wherein erosion by water, wind, and even volcanic eruptions gradually created the well-known mountains, rock formations, and canyons that we can see today. About 250 million years were required for the formation to be complete. 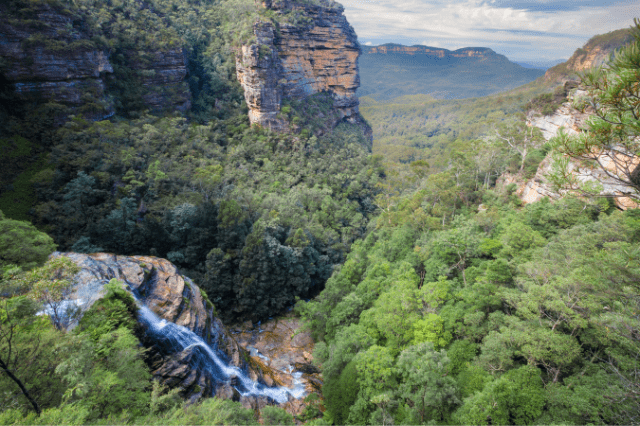 The indigenous Australian population, often known as the Australian Aboriginal community, was the first group to live in the Blue Mountains. Local tribes in the area included the Burra Burra tribe, who lived near the Jenolan Caves, as well as the Gundungurra and Darug people.

The duration of these tribes’ presence in the area is uncertain, but it is assumed to have been for many thousands of years.

Although Australia was colonised by England in 1788, it wasn’t until 1813 that the Blue Mountains confronted settlement. All of this was caused by the area’s rugged topography, which the Europeans found impossible to cross.

Unlike Australia’s indigenous people, who coexist peacefully with the Blue Mountains’ dense forest and rough rocks, European settlers wanted to change the area in order to create flat-surfaced communities inside the mountains.

The Blue Mountains have a reputation for being impenetrable since every surface is too steep for machines and too thick for construction. Gregory Blaxland, William Charles Wentworth, and Lieutenant Lawson assembled an exploratory company in 1813 with the goal of locating accessible land in the rough terrain.

The team had to overcome several obstacles throughout the exploration and was on the verge of giving up when they found the first road in the Blue Mountains in 1814 on a gentle slope on the west side of the mountains.

Three towns in the Blue Mountains district were named after these three british explorers,Blaxland,Wentworth & Lawson.They are on the scenic railway line. 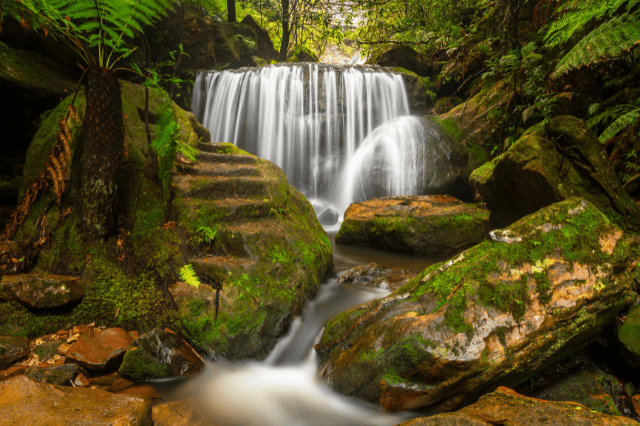 How Was The Blue Mountains Named?

Many people think the name “Blue Mountains” for the area of green mountains is weird, yet it actually fits the area pretty well. All thanks to the eucalyptus trees that grow in the mountains! One of the most prevalent plants in the region, the eucalypti are dispersed across the mountains, gorges, and valleys.

The oil found soaking within the leaves of the eucalyptus is a distinctive characteristic. The warmth causes the oil to be released from the leaves in a hazy oil mist when the sun is very hot.

Although this haze is invisible up close, it is pretty obvious from a greater distance how the light is bouncing on the mist. causing a blue haze to cover the entire Blue Mountains area, giving the impression that the mountains are blue in colour. 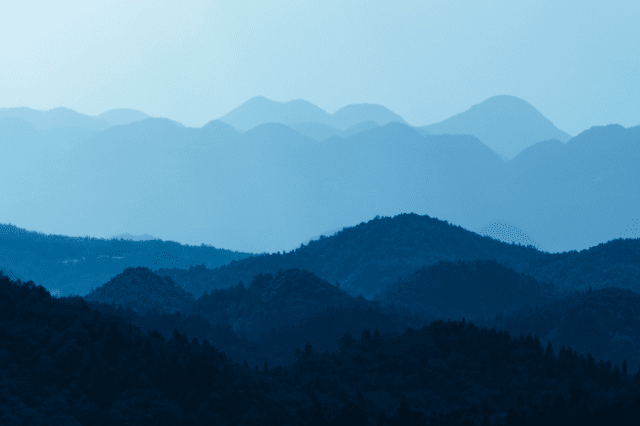 The magnificent rock formation known as the Three Sisters is unquestionably one of the most important views in the entire Blue Mountains. The three gigantic rocks that make up this natural wonder are perched on a sandstone cliff that plunges down towards the Jamison Valley.

Despite being a part of the environment for millions of years, the building has become a favourite among both locals and visitors. The rock structure, however, is more than just a natural wonder because it has a close relationship with the local native population and even has a well-known Dreamtime story associated with it.

According to mythology, three lovely sisters by the names of Meehni, Wimlah, and Gunnedoo once fell hopelessly in love with three brothers from a nearby tribe. Sadly, because the two tribes were emeries, marriage was not permitted between them.

The brothers, unable to restrain themselves, headed out to seize the ladies, which sparked a conflict between the clans. In order to protect the women from the danger of the battle, a local witchdoctor decided to help them by turning them into stone.

Tragically, the witchdoctor was slain during the conflict, making it impossible for anyone to break the curse and revive the women. Therefore, the three sisters will always be rocks, towering melancholyly above the Jamison Valley and never again becoming human. 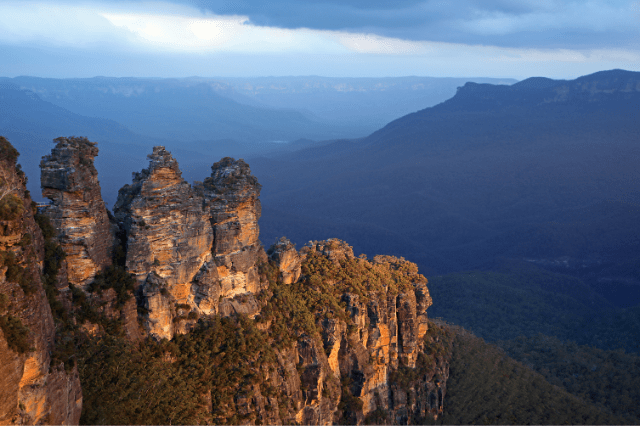 The Jamison valley is a velvety green expanse of land that offers an incredible natural scenery packed with great attractions. One of the Blue Mountains’ most well-liked tourist spots is the valley. Charles Darwin, who even has a walking track named after him here, is just one of the renowned people who have been known to have visited throughout the years.

Walking is without a doubt the most popular activity in the Valley because there are so many walking trails that wind through the landscape and lead visitors to unusual fauna and beautiful rivers and waterfalls. Even more time can be spent here by staying longer and setting up camp under the stars at one of the protected sites. 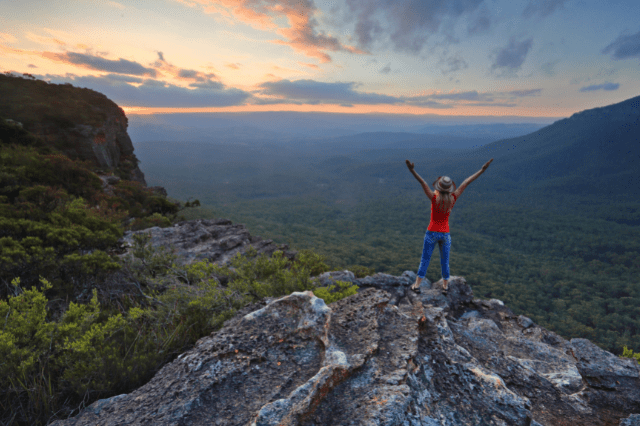 An magnificent network of limestone caves, thought to be about 340 million years old, is tucked away in the Blue Mountains. The Jenolan Caves are so developed, and a significant chunk of the cave system is so deep and congested that no one has ever entered them.

From one cave part to the next, visitors can make their way by walking or rock-climbing. Travelers may view the underground river system as well as the natural arches that exist between the caves. Since tours are the only way to enter the caverns, visitors are led through the dimly lit caves while being informed about the geology and history of each part. 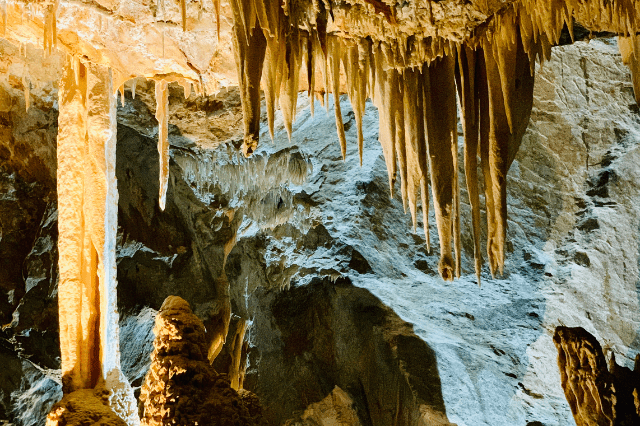 One of the Blue Mountains’ main attractions is its history, as ancient cultures left behind priceless artefacts that may still be seen today. Discover enormous murals or rock carvings of animals, people, and Dreamtime tales that are related to these old villages by visiting rock caves or secret gorges.

Each work of art offers a tale about the area and the history of the native people. There are a lot to select from, but the one that stands out the most is perhaps the remarkably well-preserved rock carving known as “The flight of the Great Grey Kangaroo” that lies close to Hawkesbury Lookout. 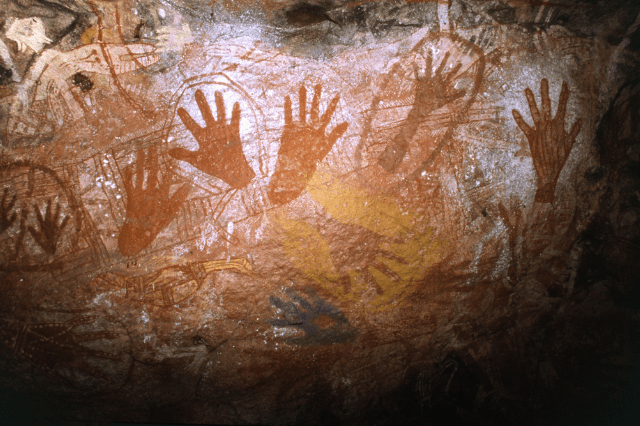 The Govetts Leap lookout overlooks the blue-hued Govetts leap valley, which is one of New South Wales’ most magnificent views. The Bridal Veil Falls may be seen cascading down on the right side of the overlook, surrounded by a wide display of greenery and bordered by cliff tops made of vivid orange sandstone.

The Grose River Valley’s sandstone cliffs are on display at Evans Lookout, along with the rich vegetation that surrounds them. The greatest time to view it is when the sun is setting because the sandstone is illuminated brilliantly by the mellow colour of the sunset.

Known as the Blue Mountains’ most well-liked vantage point, it offers unobstructed views of the Three Sisters and the picturesque Jamison Valley.

The Sublime Point, a well-liked location for hikers and photographers, lives up to its name by providing expansive views of the Jamison Valley below. 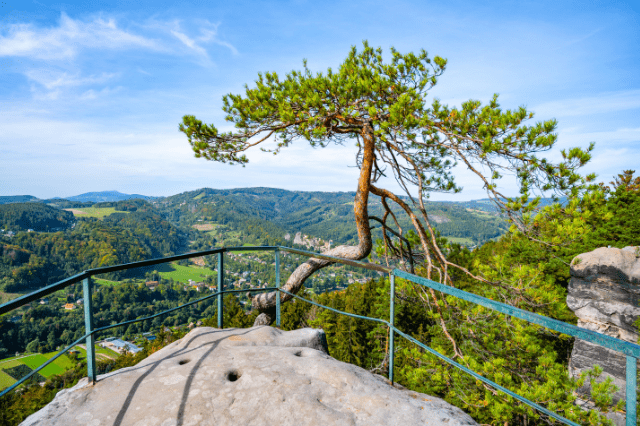 The mysterious Wentworth Falls is tucked away in the Blue Mountains’ forested boundaries. boasting breathtaking views of the valley and the water falling from the waterfall from every angle. This picturesque setting will charm you whether you are at the summit peak taking in the sight below or making your way around the base pool. 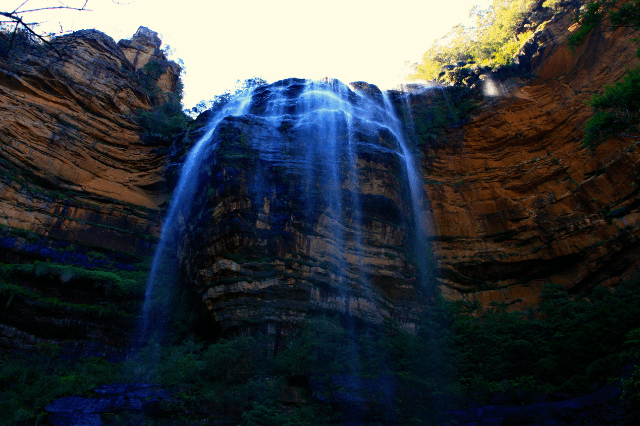 As they take in the breathtaking nature surrounding the area, visitors can cool off their achy feet in the Leura Cascades pools.

A segmented waterfall called the Katoomba Falls is located close to the towns of Katoomba and Echo Point. The Jamison Valley receives the water’s descent. allowing guests to awe at the nearby fauna and rumbling ocean.

Leura, the busiest tourist destination in the Blue Mountains, is teeming with gift shops, cafes, and a tonne of locally produced art. Bushland surrounds the town, merging with the structures to create a very lovely Australian country town.

Katoomba, which is home to Scenic World, is unquestionably marked on every traveler’s map. Katoomba, which serves as the ideal starting point for hiking trails, breathtaking lookouts, and magnificent waterfalls, is teeming with amiable residents and a relaxed rural vibe. 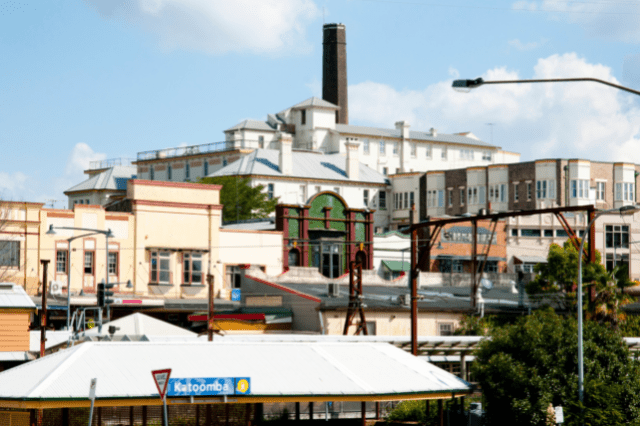 How To See The Sites

Simply, the finest way to see the Blue Mountains is at Scenic World. It actually offers you a view of the Blue Mountains from every angle, from paths winding through the bush to dramatic skyway panoramas dangling over the tree canopy.

Even the most daring travelling will get the butterflies since it is the steepest railway in the entire world. The original rail was constructed in the late 1800s, but it is today a tourist destination that will make you jump with joy. Depending on the boldness of the passengers, the rail’s 52-degree gradient can be used as either an exciting rollercoaster ride or a relaxing cruise. 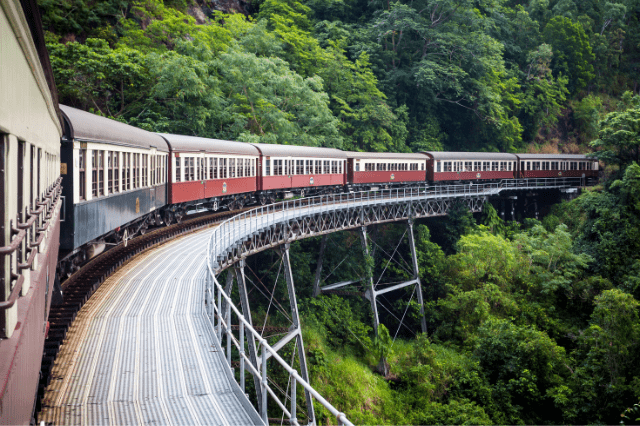 Fly 270 metres above the treetop canopy while sailing 720 metres between two Blue Mountain clifftops. Big glass windows and a glass floor give passengers in the large skyway gondola a 360-degree view of the surroundings. You won’t have to wait for hours to board the bus because it can only fit 84 people on the entire trip every 10 minutes. 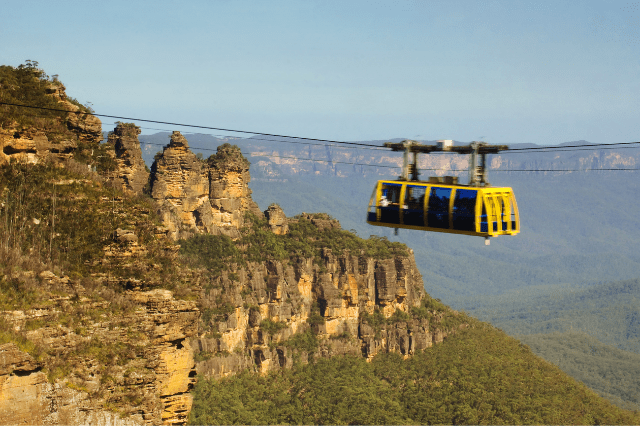 Starting at the summit of the mountain, slowly make your way down into the Jamison Valley. The cabin has three viewing areas, so depending on where you are in the cabin—the back, with views of the entire region, or the front, with close-up views of the wildlife—you may see the Blue Mountains from a different angle.

If heights aren’t your thing, Scenic World offers an option. offering 2.4 kilometres of slick boardwalk routes across the valley’s gorgeous forests. Each one is furnished with a number of educational signage about the local flora and fauna. allowing you to witness wildlife up near and personal! 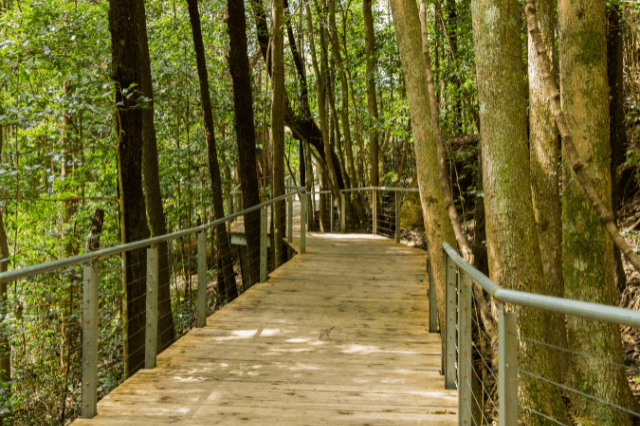 The Blue Mountains experience a little more moderate climate than the lower Sydney region. Every 300 metres of altitude gain typically results in a 2°C drop in temperature. Given that Mount Victoria is almost 1000 metres above sea level, you would anticipate a temperature difference of about 7 degrees Celsius between Mount Victoria and Sydney.

The Upper Mountains often see temperatures of roughly 5°C in the winter (June, July, and August) and 18°C in the summer (December, January, and February).

Despite the low temperatures, there are only about 5 snow days per year in the upper mountains, despite the Blue Mountains’ reputation for snowfall in the winter.Snow is extremely uncommon below Lawson. Early in the morning, frost blankets the ground, which is not unusual to see.

Windshields of moving vehicles may develop thick coatings of ice in the evening. The Blue Mountains are a great place for Yulefest because of the winter’s chilly, crisp air. Many upscale places have cosy log fires. 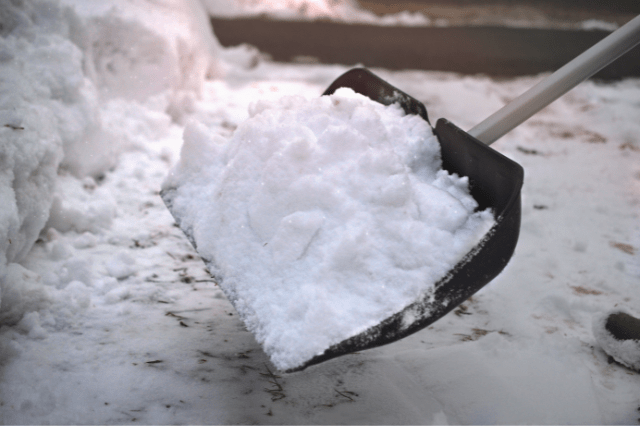